The arrival of industry and tourism

The arrival of modernity, or the arrangement of the Walloon fund and the engineering projects realized by Falcon, did not interrupt the pilgrimage of the artists – on the contrary, the Walloon was enriched with more images.

In 1842 a large part of the valley, owned by local nobles, was purchased by a young Neapolitan engineer of French extraction, Enrico Falcon, and his wife.

Enrico Falcon was liberal, anticlerical and anti-bourbon; he loved architecture and had traveled extensively. He thought of enhancing the bottom of the valley by rebuilding a mill from its foundations and transforming it into a steam mill.

It was an innovative enterprise, which followed the most advanced bourgeois Europe model.

In 1848 Enrico Falcon, wanted by the Bourbon police for his liberal ideas, fled to Paris with his wife Josephin, who died shortly after, while the engineer returned to Sorrento in 1851, where he defended his business from attacks of political and economic obstacles.

In 1861, Falcon naturally participated in the unification of Italy. 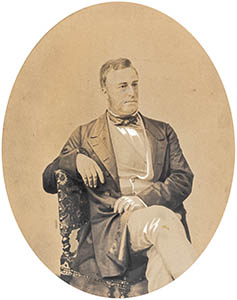 Falcon had studied in Paris and directed the works of the Naples-Portici railway in 1839. 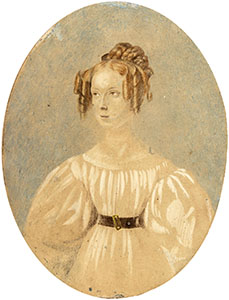 She was the daughter of the Dutch Consul in Naples and came from a family of steamship entrepreneurs.

Drawing by William Havell and engraving by Frederick James Havell.

In the Havell drawing, in the foreground, there are some tuff quarrymen at work. 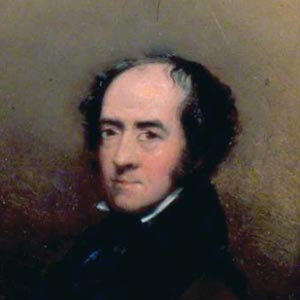 William Havell in a self-portrait of 1838

English, he was a great landscape watercolorist. From 1816 he traveled for a decade to Asia, China and India.
In the early 1960s, with the unification of Italy (1861), tourism was finally able to cross the country more easily and Sorrento became even more successful. Tourists stayed in Sorrento to make excursions in the gulfs of Naples and Salerno: Capri, Massa Lubrense, Amalfi, Cava, Salerno, Paestum …
«Sorrento enjoys the most temperate climate in Italy, and during the summer months it is crowded with visitants, chiefly English, who make it their head-quarters for excursions to Paestum, Salerno, Capri, and other interesting localities.»

In 1864 Camillo Mapei thus described the valley and the ancient eastern gate represented in the view of Brockedon and Willmore. For Mapei the extraordinary ravines from which “the singular and beautiful” Sorrento was almost entirely surrounded were still surprising. At the bottom of the ravine a steep and narrow path led to the sea or to the mill and the hill.
“The extraordinary ravines by which Sorrento is nearly surrounded are among the striking features of this singular and beautiful locality. The lofty arches that cross the gorge in our view, are of Roman construction, and over them lies the approach to the eastern gate of the town. Near the bottom of the ravine a steep and narrow path leads to the sea shore. ” 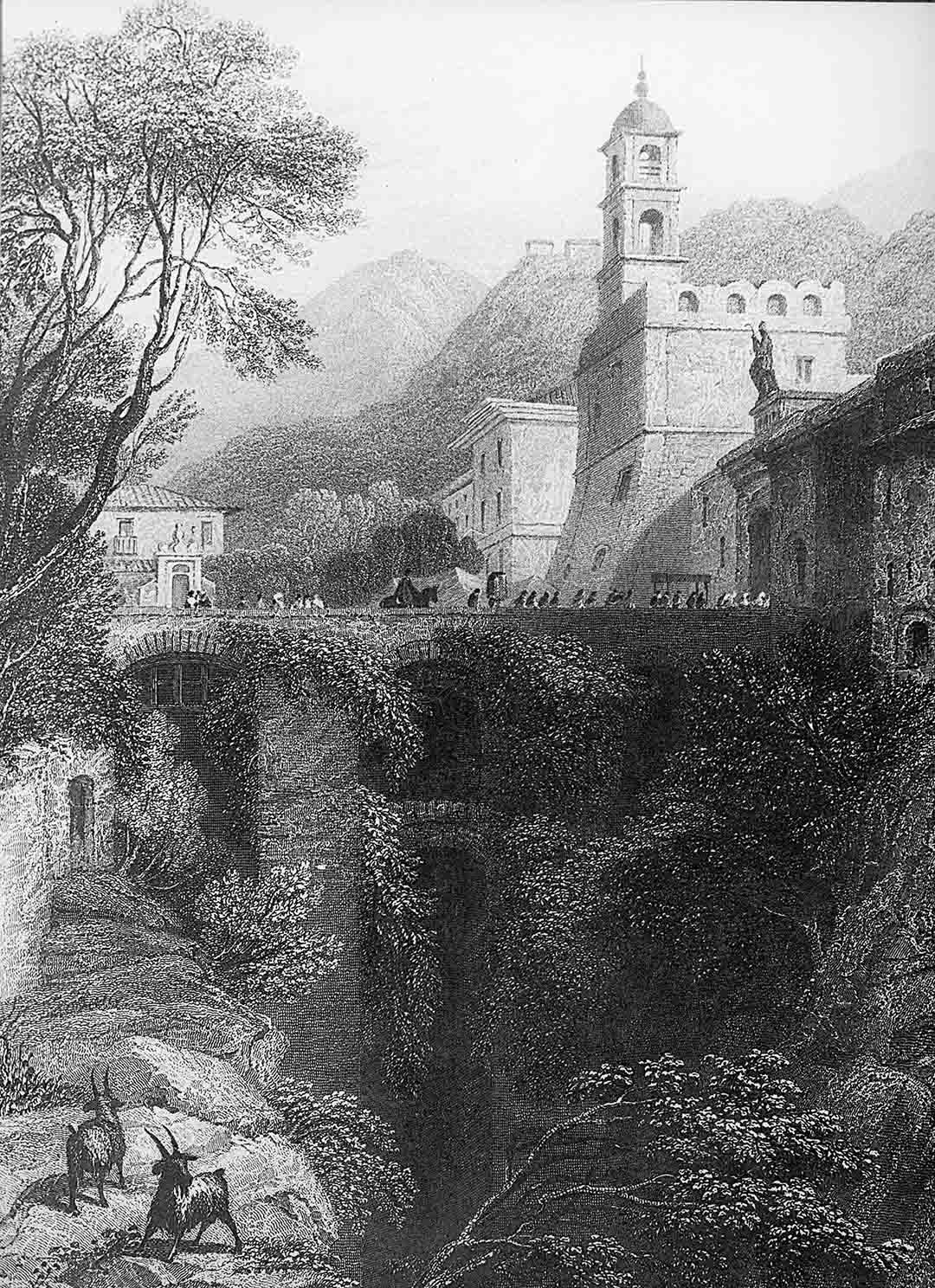 «Drawn by W. Brockedon from a sketch by Mrs. J. Davenport – Engraved by J. T. Willmore». 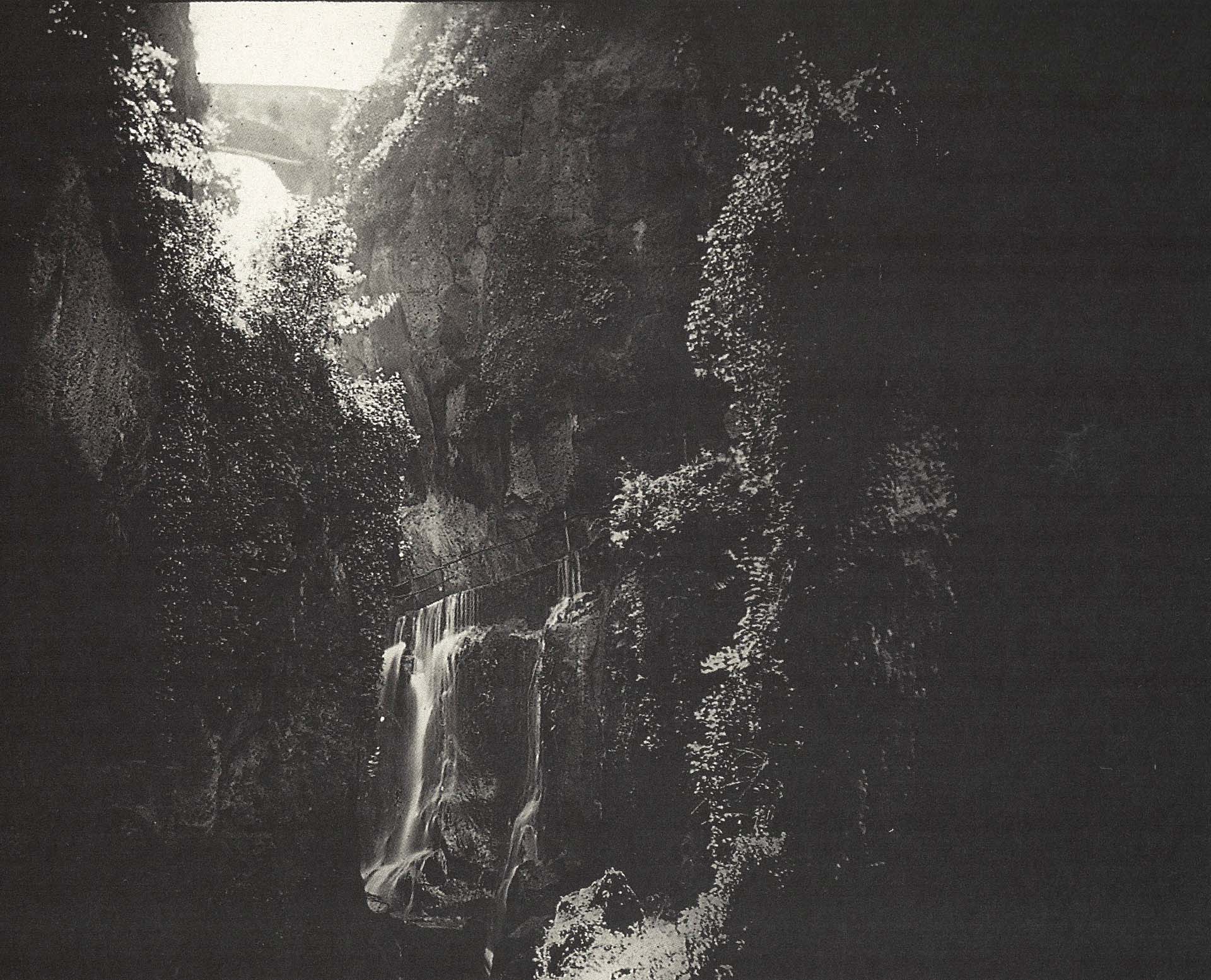 Ziegler was a photography studio on Boulevard de Capucines in Paris.

The valley taken from above, looking towards the hill; below you can see Falcon’s mill. 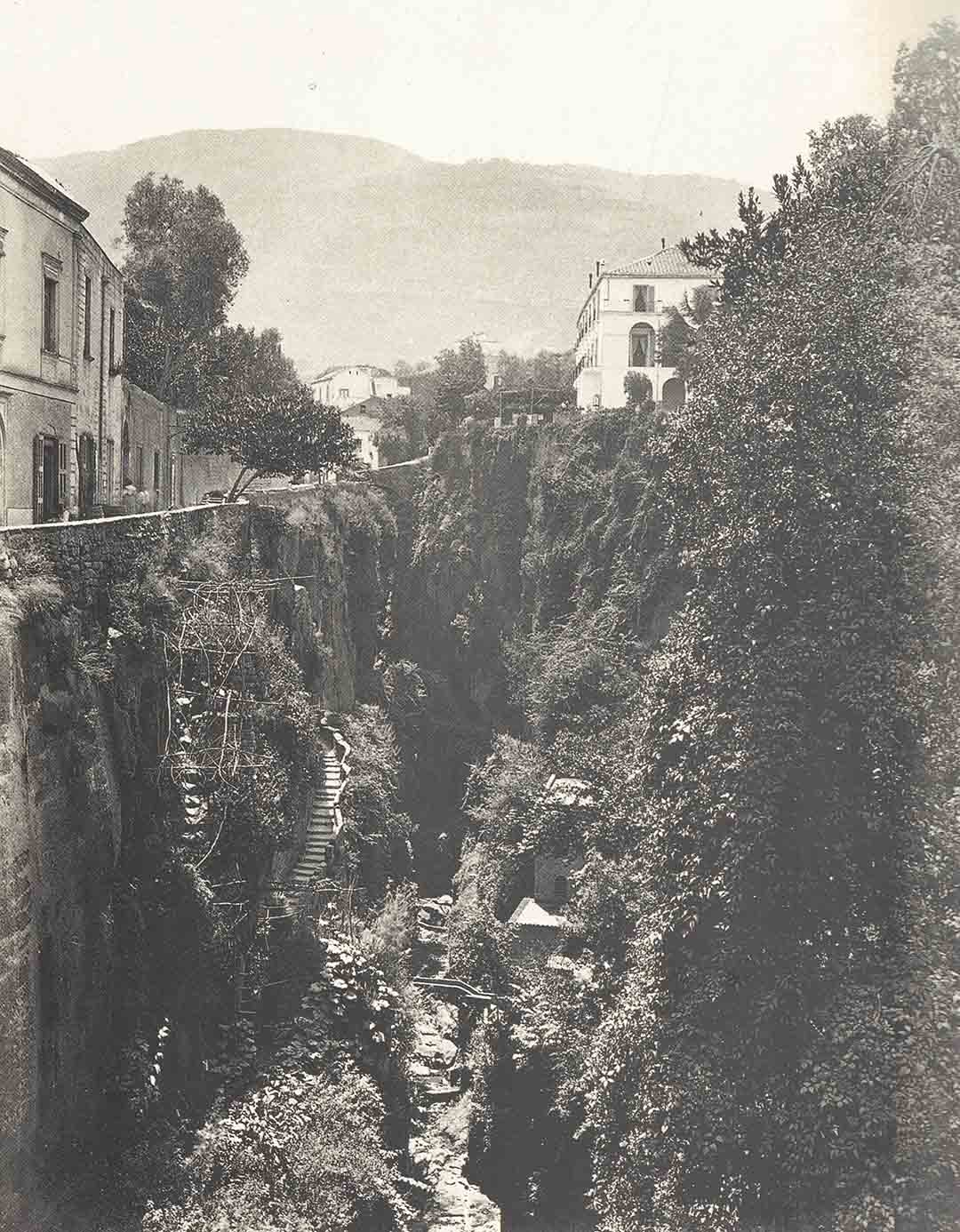 The bridge with the view of the mill and a local figure became one of the favorite subjects, endlessly reproduced in postcards for the tourist market until the early twentieth century

The valley of Sorrento became the “valley of the mills.” 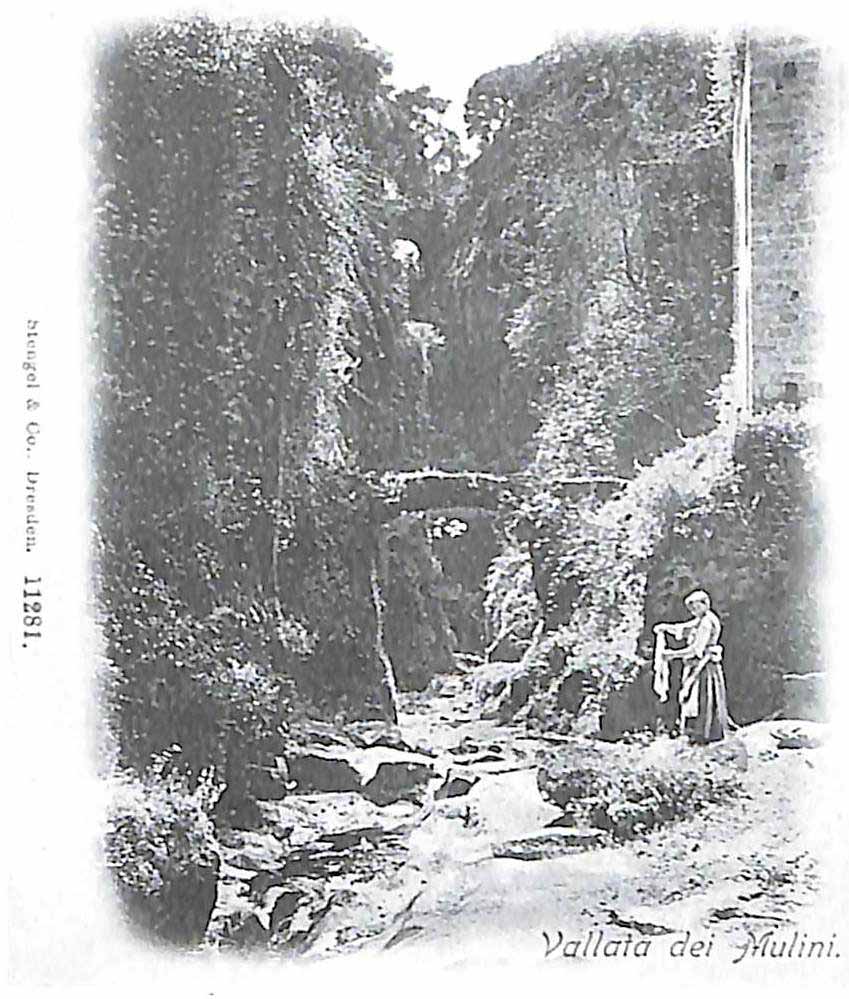 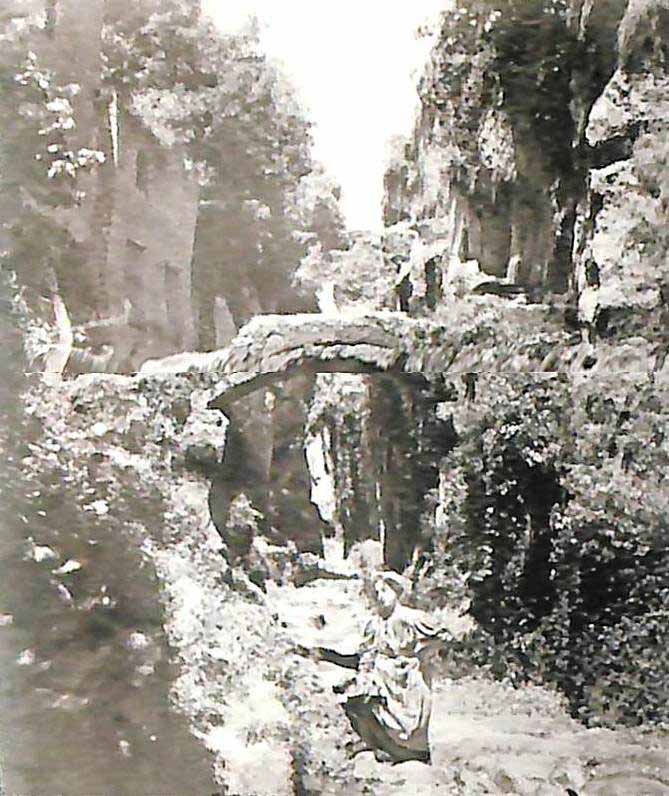 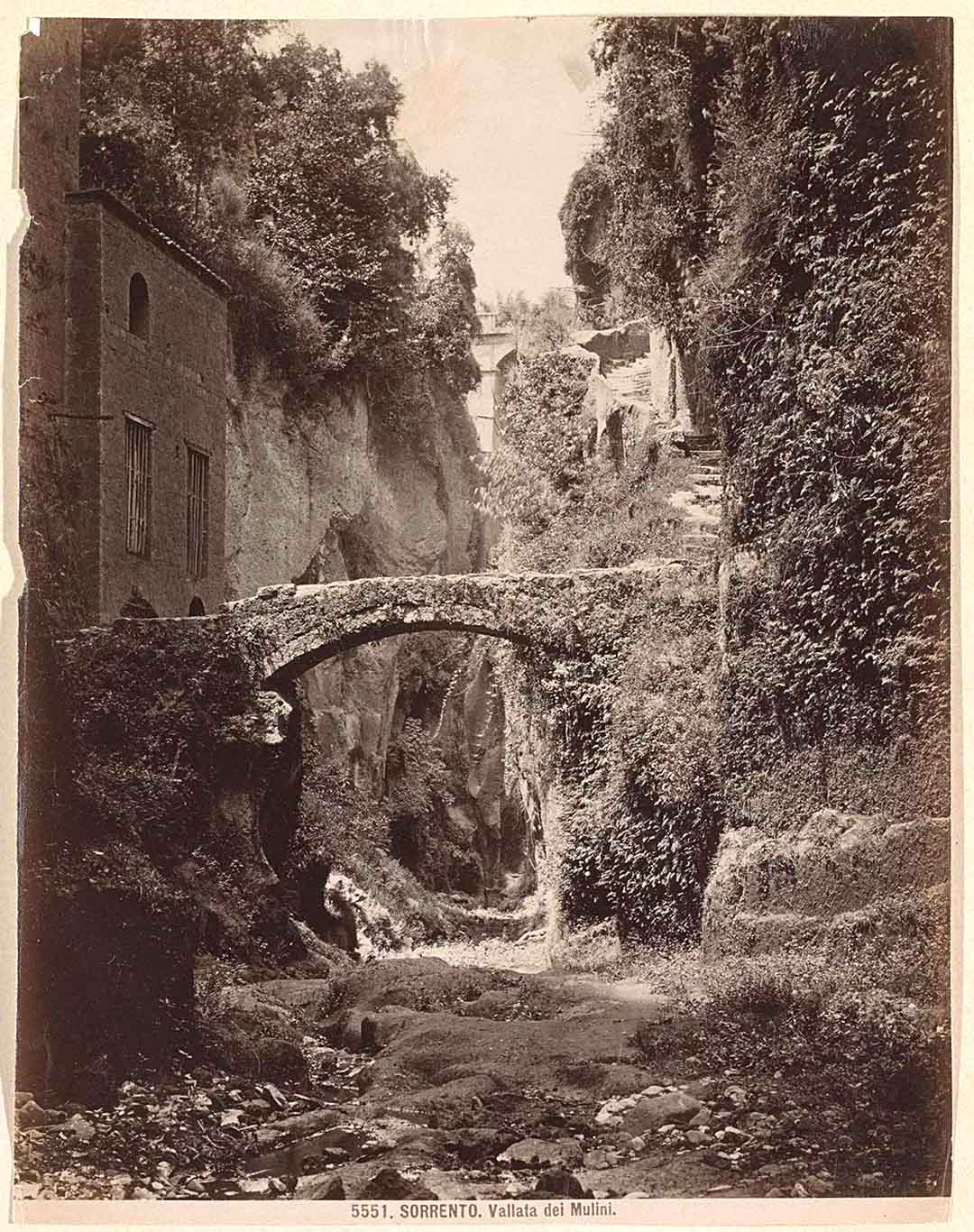 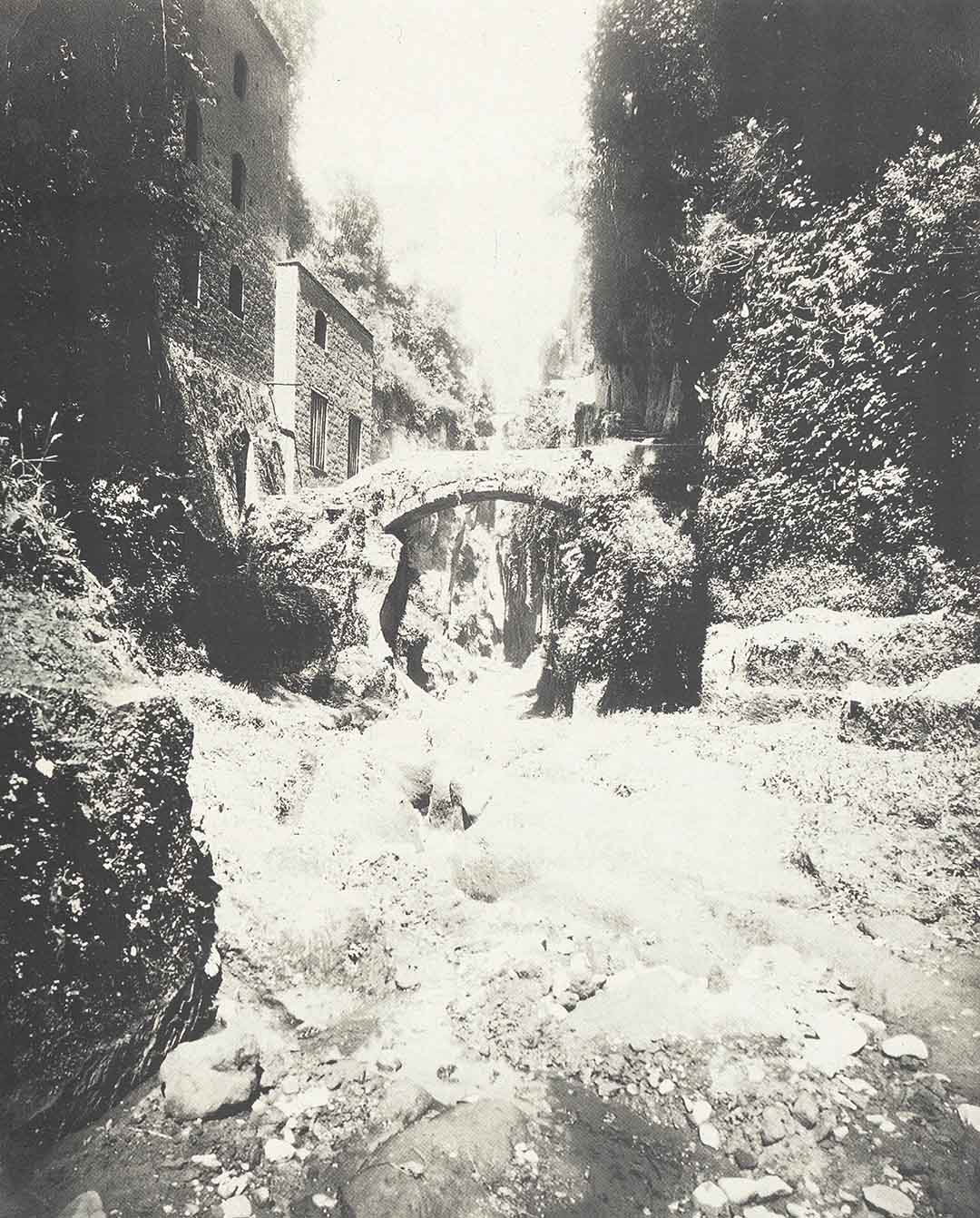 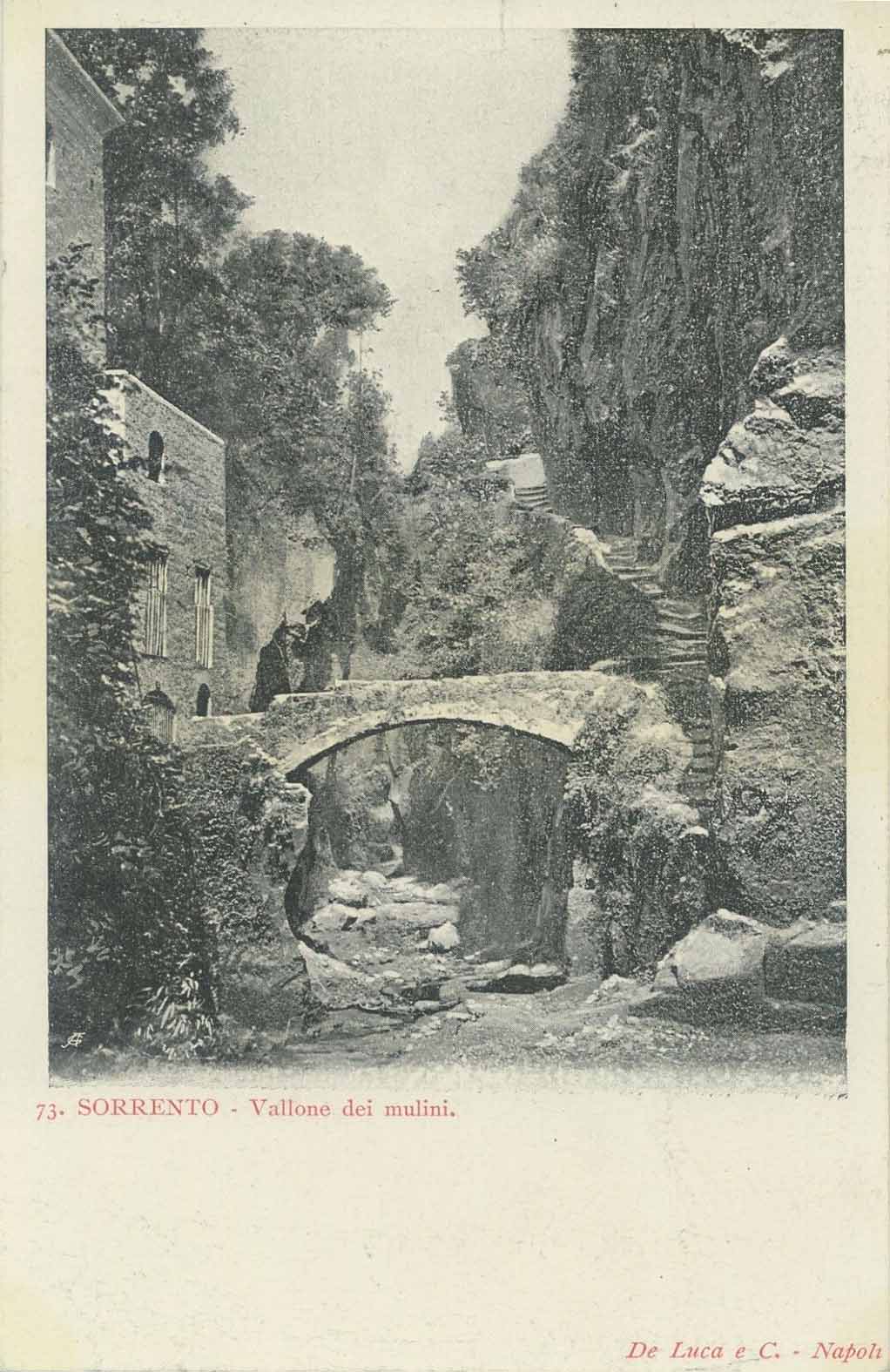 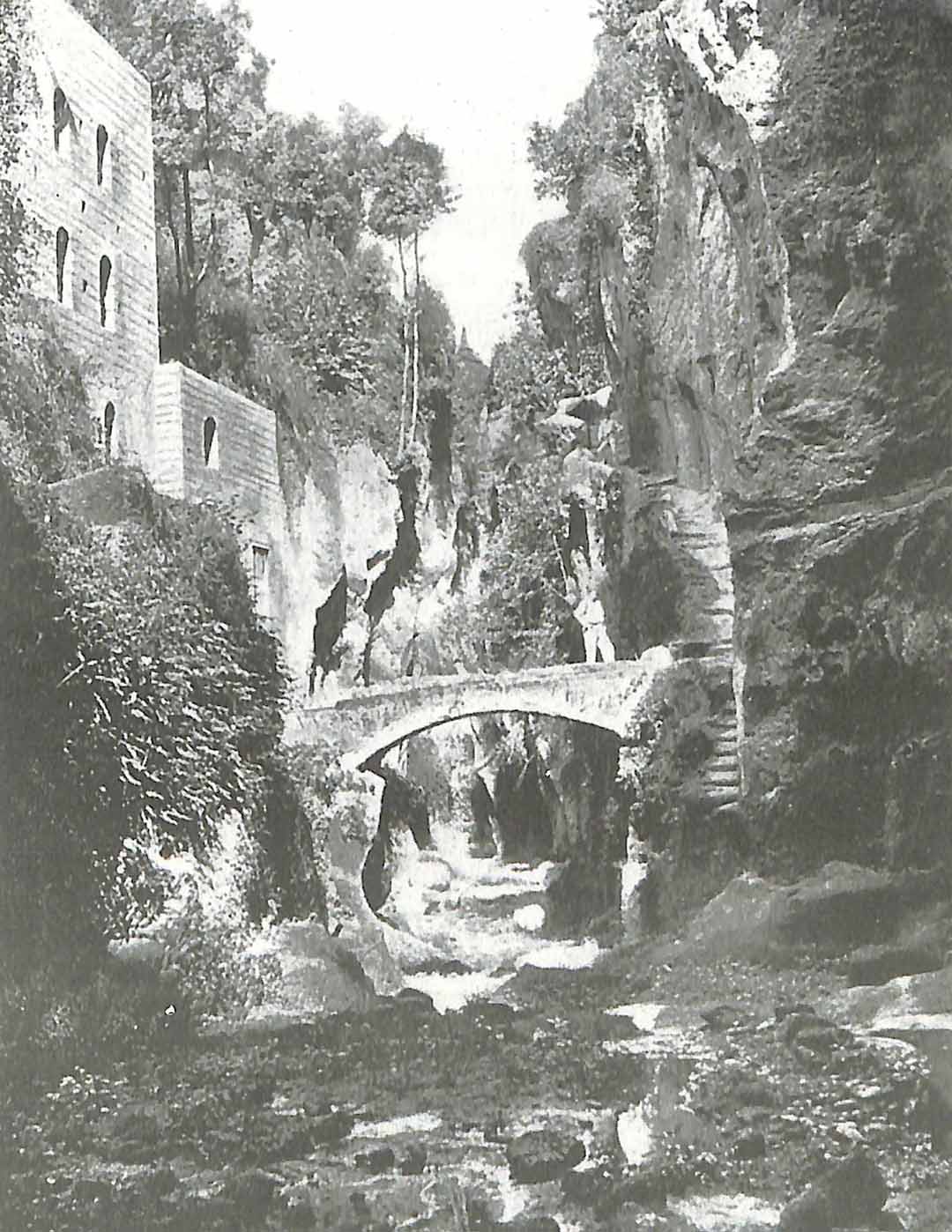